Automated pattern recognition with basic, high-level coding can be readily applied to petroleum production surveillance to reduce the impact of equipment failure. Machine learning is an application of regression techniques which range in complexity from simple linear regressions to convolutional neural networks. This paper outlines a machine learning based solution that was developed in response to downhole gauge failure, a common petroleum engineering problem.

A temporary proxy for downhole pressure measurements was developed after gauge failure on an offshore gas production well. A solution was found in the machine learning space by applying multivariate linear regression to represent relationships within the production system. The workflow presented is based on Python code using the open source SKLearn library. The paper provides Python code example which readers can adapt to the context of their own specific requirements.

The method uses available production data (known conditions of pressure and temperature from the wellhead and further downstream, choke settings and well total mass flow rates) to predict an unknown downhole pressure. The failure of a downhole gauge was simulated by removing the downhole data from the dataset at a certain point in time. The machine learning model was trained using 19 months of well production data. The nine months that follow was then entered under gauge failure conditions (with downhole data removed), to predict downhole pressure from other production data. The result was a downhole pressure prediction within 0.2% (40 kPa) of the actual gauge measurement up to nine months after the simulated gauge failure.

The prediction was compared to downhole pressure estimations that were calculated with the operator’s calibrated physical well model using the Mukherjee-Brill correlation. The machine learning model outperformed the conventional physical correlation over the test period. The model was validated as an adequate short-term replacement for downhole pressure measurement for an offshore gas well. The solution delayed disruption to the management of reserves, enabled the continuation of production forecasting and postponed subsea intervention.

This paper also provides a foundation for assisted trend analysis, in which a gauge that is identified as drifting from the long-term trend can aid in the detection of physical changes such as water breakthrough. 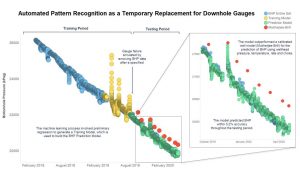