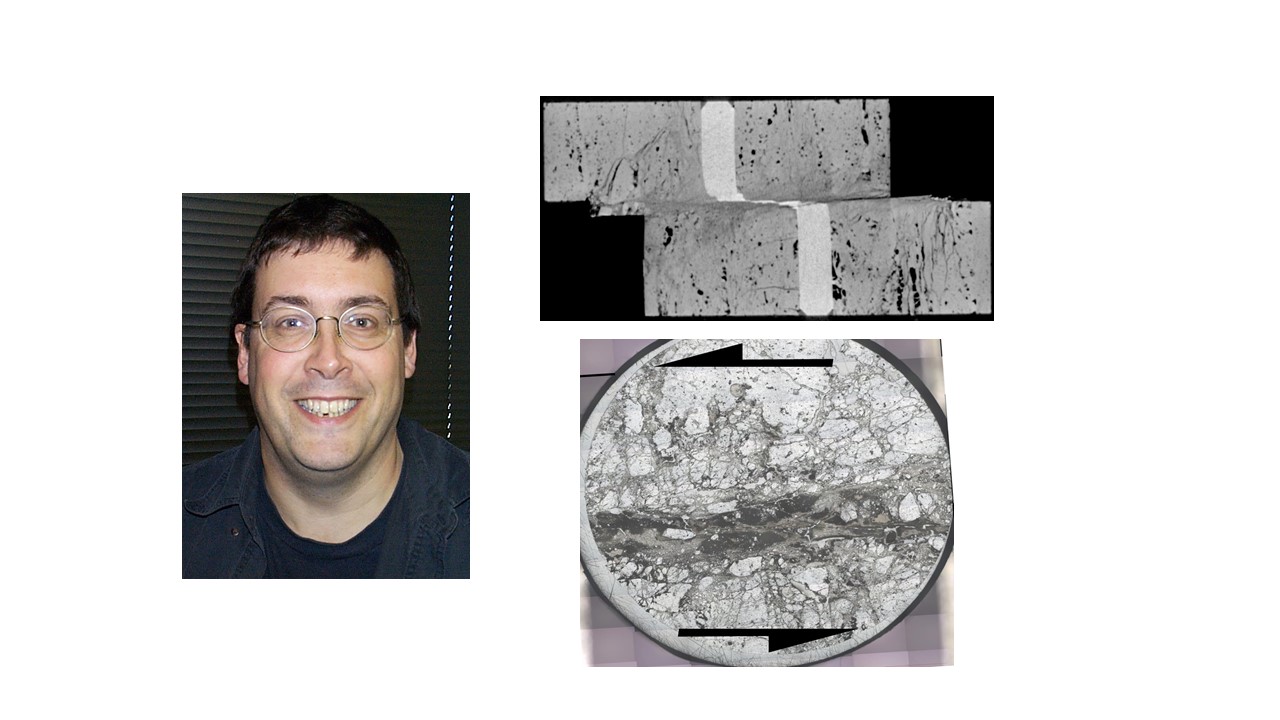 Geomechanics and microstructure of faults are intimately linked due to both physical and chemical processes which can have a significant effect on rock strength and flow properties. This presentation summarises the controls on fault rock strength, shale smear continuity in siliciclastic rocks, fault transmissibility in carbonates and the links between microfabric and permeability anisotropy development in sheared clays. These conclusions have been reached through the use of multiple geomechanical and microstructural techniques, including triaxial, ring shear and direct shear box testing supplemented by optical and electron microscopy and measurements of petrophysical properties such as porosity and permeability.

Examples using such approaches are used to highlight how kinematic and diagenetic histories control rock strength. Cementation is shown to generate stronger fault rocks, but continued reactivation indicates that the cementation results in a competency contrast which promotes failure along the boundary of the cemented fault zone and reservoir rock. In contrast, alteration of load bearing feldspars to kaolinite resulted in reservoir and fault rocks having similar geomechanical properties but friction coefficients for a granular rock are low as a result of the alteration of the rock load bearing framework.

Direct shear tests were used to evaluate fault zone development and clay smearing in siliciclastic rocks. A large shear box was used and variables tested included displacement (up to 10x clay layer thickness), bedding dip, plus sand and clay properties (porosity, water content and consolidation state) with fluid flow across the clay being measured. The breakdown of the clay seal was linked to its clay content while the smear continuity was related to increased effective normal stress during shearing but not to the stiffness or ductility of the clay layer. The formation of clay smears was governed by brittle processes (segmentation, abrasion and grain crushing), rather than by drag, plasticity or clay injection. Seal breach by fluids was not always achieved even in the case of discontinuous smears due to abrasion and grain crushing of the reservoir sand.

The direct shear behaviour of carbonates was also investigated, testing porous, vuggy travertine samples. Tests were performed in both static and dynamic mode, monitoring fluid flow both during and after deformation stages. The mechanical behaviour of the travertine was similar for slip between 20-120 mm, with low strains dominated by fracturing and high strain by gouge development. Irrespective of the effective stress level, dynamic fault transmissibility decreased for all samples. Cylindrical core plugs were taken across the developed fault zones to reactivate them in triaxial tests. Frictional hardening was noted in these tests while permeability continued to decrease due to further development of fault gouge. Once gouge develops, transmissibility is permanently decreased and reactivation has no impact.

Finally, deformation to very high strains can be achieved using ring shear devices. A sealed ring shear permeameter was used to deform pure clays and remoulded clays. Comparisons of porosity and permeability were made to oedometric tests to simulate the same sediments undergoing one-dimensional compaction. In all cases, shear parallel static permeability was found to be similar to the permeability of one dimensionally consolidated sediments, while shear normal permeability was one to two orders of magnitude lower. Microfabrics observed in optical and scanning electron microscopy showed the development of flattening fabrics, Riedel shears and shear parallel through-going fractures, which were interpreted to obstruct the shear normal flow.

Overall, geomechanical experiments combined with microstructural observations and petrophysical measurements can shed light on meso- to micro-scale fault zone processes and aid us in evaluating more complex situations observed in the subsurface. Accepting that challenges with scaling exist, the intermediate scale of the large shear box experiments starts to provide some data that can be evaluated in terms of larger scale bulk fault seal algorithms as well as enlighten us as to fault zone processes and products with their concomitant effect on rock properties.

“Dave Dewhurst is a senior principal research scientist at CSIRO Energy in Perth, Australia. His research career started looking at application of soil mechanics techniques to modern day accretionary wedges, moved into physical properties of clays and shales and then into polygonal fault systems in fine grained sediments before moving to Australia. At CSIRO, he has worked on fault and top seals, overpressure, overburden/gas shale properties and more general rock properties for applications in petroleum geoscience and CO2 storage”.